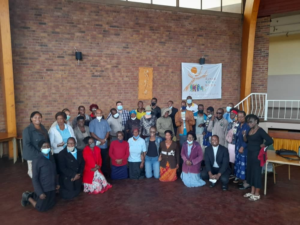 By Fr. Limukani Ndlovu from Zimbabwe

The words by the Spiritual Director for Cure Children’s Hospital Pastor Jorum Mugari that, “A Church without people with disabilities is a disabled Church” sounded very sharp and challenging to the audience which comprised of those disabilities, care givers and animators of Missionary Childhood Association. An ecclesial community which does not either have or attend to people with disabilities is not true to itself and is not faithful to its call of discipleship. Synodality calls for inclusivity, that is, making every effort to involve all those who may feel excluded and marginalized.

On Saturday the 5th of February, 2022 a consultative meeting with people with disabilities was held at St. Mary’s Minor Basilica. The meeting was strategically convened in the spirit of synodality, that is, to listen to the concerns, thoughts, experiences and feelings of persons with disabilities in the church. Each parish of the Archdiocese of Bulawayo was expected to send a delegate for this session. Although the turn-out was lower than originally expected, the meeting went on exceedingly well and the participants actively participated. The diocesan Synodal Team facilitated the day’s proceedings.

In his welcome remarks, His Grace, the Most Rev. Alex Thomas expressed his profound gratitude for the initiative. He applauded the work done by Cure Children’s Hospital of Zimbabwe and urged the people, especially in Bulawayo to make use of the facility highlighting that, “our responsibility is to make the life of another person comfortable and perfect as God intends”. While referring to the moral, social and pastoral care for people with disabilities, the archbishop challenged the participants to, “look at each other with respect and unity”.

At the same occasion, the executive director of Cure Children’s Hospital of Zimbabwe, Mr Jonathan Simpson presented on the organization. Of importance is the hospital was established in April 2021, as the first and only hospital in the country to provide orthopedic care for disabilities such as clubfoot, bowed legs, and knock knees to children regardless of their economic status. The hospital also offer teaching and training services and located adjacent to United Bulawayo Hospital in Bulawayo.
Cure Children’s Hospital is a Christian organization which relies solely on the goodwill of its partners, cooperate bodies and ordinary citizens. It seeks to partner and network with the Catholic Church which has several health centres dotted in the Metropolitan of Bulawayo, Matabeleland North and South provinces.

Fr. Joe Ncube then made a presentation on the Synod on synodality. The participants followed with keen interest during all the presentation. Five breakout groups were created for purposes of discussing on the synodal questions which basically interrogated the manner and extent to which the Church journeys or accompanies people with disabilities.

Participants of different physical conditions shared their experiences in their churches as well as in their respective communities. After that, they shared thoughts and feelings about the issues raised. Ultimately, members in each group sought the guidance of Holy Spirit for the way forward. This is exactly what the crowd said when they were pierced to the heart by the preaching and witness by Peter and the other apostles, “Brothers, what should we do?” (Acts 2:37).

The session was concluded with an opportunity for the secretaries of each group to report to the larger group and that segment was facilitated by Sr. Melta who is one of the Synodal Team of the Archdiocese. The team expressed gratitude to the parishes which had sent in their delegates.