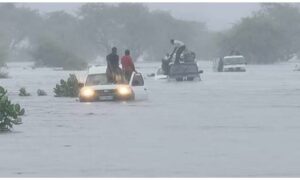 By Johan Viljoen from South Africa

Tropical Storm Ana made landfall in Mozambique on Monday. The storm, which had wind speeds of up to 100km/h, had rainfall of 200mm in a 24 hour cycle, which caused widespread flooding, significant damage to infrastructure and displaced people, many of whom were already fleeing from the latent insurgency in the country at the moment.

The storm, which made initial landfall in Angoche district, in Nampula province, then moved west, falling on parts of Zambezia province, as well as Tete province. It also affected Sofala, Niassa and Cabo Delgado provinces.

According to official reports, at least 10 fatalities have been reported. Two people were swept away by the Licungo river in Mocuba, Zambezi, six additional deaths were reported on Tuesday morning, and by Tuesday afternnon, another two, one of whom died when a wall collapsed on them. There has also been estimates by government and UN agencies on the ground of approximately 500 000 people being affected by the rain and flood waters, and multitudes of destroyed houses.