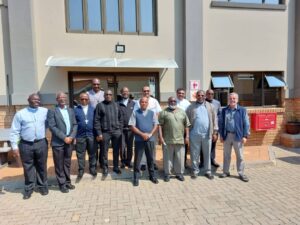 From March 22-23, 2022, the IMBISA Standing Committee and Presidents of member Episcopal Conferences met in Johannesburg, South Africa at the Europrime Hotel.

The meeting, facilitated by Dr. James Nyawo, was themed “New Times, New Frontiers: Sustaining the Prophetic Role of the Church in IMBISA.” The workshop’s objectives were to reflect on the socioeconomic reality/context of the Southern African Region and to explore IMBISA’s regional engagement strategies.

As part of the workshop, the Bishops discussed a variety of issues, including pandemics such as the Coronavirus which caught everyone unaware, violent extremism in southern Africa like that seen in Cabo Del Gado, Mozambique, human security and climate change, as well as social unrest and political violence in the region. In conclusion the Bishops did a stakeholder analysis and examined the strategies for engagement at regional level.

The Bishops agreed that, after conducting a thorough stakeholder analysis, the Church should collaborate with established regional institutions and like-minded organizations on areas of mutual interest in order to promote the common good. The SADC Parliament was mentioned as another avenue through which the church could influence regional policies.