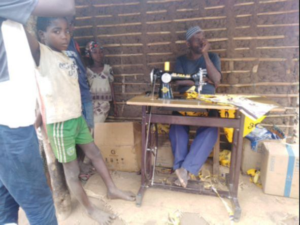 Photo: Almaҫe, one of the IDPs in Nankumi at his sewing machine surrounded by some of his students

By Fr. Dumisani Vilakati from Eswatini

On the 29thNovember -3rd December, I, representing IMBISA, had the good fortune of visiting the Diocese of Pemba in the Cabo Delgado Province, Mozambique. The aim of the visit was to see and experience first-hand the life of the Church in this area of Northern Mozambique. This was important given that IMBISA had issued two statements calling for peace in Cabo Delgado.

In sweltering heat, I was warmly welcomed by the Apostolic Administrator of the Diocese of Pemba, Bishop Juliasse Sandramo. The Bishop’s house was to be the place of residence throughout my stay in Pemba. I was also welcomed by other staff at the Diocesan Chancery, Caritas Pemba and not least Fr. Frederico Antonio, one of the priests of the Diocese of Pemba, whom I had known since my days at the Pontifical College of St. Paul in Rome.

On Tuesday 1st December, we, together with the Caritas Pemba team, left Pemba at 5.30am so as to visit some settlements where there are Internally Displaced Persons (IDPs). This was in the Montepuez district of Cabo Delgado. During this visit I was able to see some of the worst effects of war with people living in makeshift accommodation. The accommodation is mainly made of grass and nothing else, with a height of just about one metre. At this settlement there were some five hundred families who were still waiting to be settled. Their biggest needs were food, adequate shelter and clothing.

As we were making rounds in the Montepuez area, we also visited a settlement called Nankwapi in which 2700 families have since settled. It is in this site where the Diocese of Pemba is constructing one of two Health Centres, thanks to financial support by Pope Francis. During our walk about in Nakwapi, a report reached us that a pregnant woman with twins was giving birth in the settlement. Unfortunately, only one of the twins had been born and the other remained in the womb thus posing a great danger to the mother and her unborn child. There was no transport to take the poor woman to hospital so the Caritas Team responded immediately and made sure that the woman reaches the hospital immediately. Once the Health Centre is functional, one can only hope that such risks in child birth will be kept to the bare minimum. The day ended with a visit to another settlement, 3rd Fevereiro in the Mecufe area, which will host some 325 families once completed. The settlement is also under the care of the Diocesan Caritas.

On Wednesday 2nd December, we left early in the morning at 5.30 heading mainly to the district of Chiure. The first settlement we visited was Nankumi which hosts some 2,851 IDPs. The Caritas Team indicated that this was the first settlement for IDPs in Cabo Delgado. It is, in a sense, already complete with many facilities, like water and sanitation as well as a school. The people have also been assisted with life skills and work instruments. Carpentry tools and sewing machines have been distributed by Caritas Pemba. It was here that I spoke to a man by the name Almaҫe. He was busy sewing with a number of children around him. Almaҫe told me that he used to do sewing before fleeing the insurgency and was assisted by Caritas to get a sewing machine. He receives a modest income from this skill as he sells the wares to the others IDPs. More importantly, he also has the duty to teach young people some sewing skills. The children standing next to him were some of his students. He spoke some words which made a deep impression on me: “Please! Never forget us”!

After this we proceeded to the Meculane settlement where Caritas with the assistance of the Catholic Relief Services and USAID is building some 948 houses so as to accommodate IDP’s. The other Health Centre, still under construction and with the kind financial contribution by Pope Francis, is located in Meculane. Whilst walking about in this settlement, I witnessed a visit by Save the Children. They were having a fun day with the children who reside in the settlement. This inevitably made me wonder as to the disruption to the education of the little ones caused by the war. No, doubt, education has been disrupted. A good number of the settlements have some makeshift classrooms so as to see to the education of the children. This is encouraging even though resources are scarce. Coming back to the visit by Save the Children two things struck me: The first is that Caritas Pemba is working well with other Agencies and this is praiseworthy. The second thing was to see the joy of the children as they were playing. It is not all doom and gloom. Hope is present in the lives of these children. They will need all the assistance they may get so that their lives may be harnessed accordingly. Without education, the risk of a cycle of strife and violence may remain as some can be easily recruited as child soldiers.

We ended the day with a visit to the Mecufe area, in Natuku, where a settlement is being set up by Caritas Pemba. 200 houses are being built so as to house the same number of families. The model of setting up the settlements is developmental. Caritas Pemba buys the building materials and pays the technician with the owners of the house providing unskilled labour. Whilst the IDP’s work on their houses they are accommodated by some families in the neighbouring villages. I also met three Religious Sisters, Brazilian Nationals, who had also become IDP’s. In as much as they missed their former convent, nevertheless they seemed to be content that they could adapt their ministry to the new reality of assisting other IDP’s.

After all the visits, I got a chance to speak to Bishop Juliasse who was kind enough to show me the map of his Diocese and how a good part of it was bereft of Missionaries due to the insurgency. Nevertheless, the Diocese through its Emergency Interventions Department and Caritas Pemba, was doing everything possible to alleviate the sufferings caused by the war. He indicated that the arrival of the foreign armies like Rwanda and the SADC force, had brought some calm in the Province. In his opinion, the presence of foreign armies may not be the final solution as there is need to work on peace-building initiatives. One of the things he speaks of is a proper formation of those who join the Mozambican army. It is not enough to teach recruits how to hold and shoot with the gun but to teach them proper human values. He opines that the Mozambican army did not have proper values. As a result it was not well appreciated by the local people of the Cabo Delgado Province.

Bishop Juliasse is most grateful for the support from the local people and other peoples and agencies from abroad as well as the Mozambican government. This makes it possible for the Church to intervene decisively in a number situations. What is clear about the Cabo Delgado situation is that the Church is present in the lives of the poor and needy.

As I concluded my visit in Pemba, the words of Almaҫe rang in my ears: “Please! Never forget us”. I hope and pray that the Church in IMBISA dares not forget the people of Cabo Delgado.