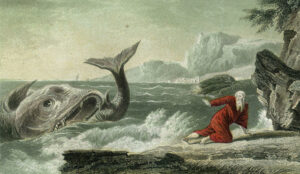 Jonah is spat out by the whale. Caption reads: ‘ And the Lord spake unto the Fish, and it vomited out Jonah upon the dry land. ‘ Jonah 2. After an engraving by W French. (Photo by Culture Club/Getty Images) *** Local Caption ***

Jonah’s name means “Dove.” Jonah had proven his prophetic office by proclaiming the truth and establishing greater peace in Israel. Now the famous prophet from Galilee was being told by God to perform another successful mission to Nineveh. God’s call is for a permanent mission which demands self-surrender. God’s love, Patris corde (Father’s heart), is ever seeking to save those who are rightly doomed to eternal punishment. God has no pleasure in the sinner’s death (Ezk 18: 23), because God is a moral being, and it is contrary to the nature of moral beings to delight in suffering for its own sake. Nevertheless we must know why Nineveh is called a “great city?” How big was it? What was its population? What was the “wickedness” of these people? Why had God decided to destroy it?

One of Shem’s sons (Noah’s grandson), was Asshur (Gen 10:22), who first founded Assyria. He probably fled from Nimrod and Babel in order to worship the God of Noah with his family and friends. Soon the wicked Nimrod (a great grandson of Noah by Ham), who had begun his kingdom with Babel and its tower in rebellion against God, “went forth into Assyria, and built Nineveh” (Gen 10:10-12). Nineveh eventually became Assyria’s chief city and capital. There was perpetual war between Assyria and Babylonia from the time of Nimrod until Assyria was finally defeated about 609 BC. That war probably began by those seeking to serve the God of Noah constantly being oppressed by those who followed Nimrod and served his gods. In the bitterness of the conflict, they all turned to false gods. The entire history of Assyria is filled with a reign of violence, terror, torture and killing, conquered peoples and they proudly carried home parts of their enemy leaders’ bodies as souvenirs of war. The king of Nineveh would usually bring the severed head of a recently conquered king home, raise it on a pole in the midst of his royal banquet commemorating his victory and finally put it over the gate of Nineveh where it slowly rotted away. The opposing generals would get even worse treatment. The chronicles of Assyria say: “The Elamite general, Dananu, was flayed alive, then bled like a lamb; his brother had his throat cut, and his body was divided into pieces which were distributed over the country as souvenirs.” There seemed to be no act of cruelty which these conquerors had not employed! When sinners have out-lived their probation and are cut off in their sins, their depravity will be thenceforward restrained. How shocking it must be to the pure and holy God to see His creatures giving themselves up to utter and unrestrained depravity — to see them giving boundless scope to the most odious and horrible rebellion!

As we all know, Sodom and Nineveh in the Bible were both evil and corrupt cities and the outcry against the cities had reached God’s ears, so God decided to rain disaster and destruction down upon them. “Go at once to Nineveh, that great city, and cry out against it; for their wickedness has come up before me” (Jonah 1: 2). God wouldn’t destroy Sodom as long as it had ten righteous people. The facts, however, prove that there was no righteous person other than Lot. Jonah knew that God destroyed Sodom. Nonetheless why Jonah, the successful prophet, did not like it at all and showed his distain by fleeing the opposite direction? Jonah feared the Assyrians as much as any of the people of his day and wanted nothing to do with the criminal empire and was delighted that God would destroy them in forty short days! Jonah in his human weakness probably wanted to see Nineveh’s downfall to satisfy his human sense of justice or the destruction of Nineveh, who were enemies of Israel, would have been seen as victory for Israel. But the successful prophet says: “I knew that you are a gracious God and merciful, slow to anger, and abounding in steadfast love, and ready to relent from punishing” (Jonah 4:2). God’s call is for repentance. He is ready to forgive and reconcile. This permanent mission of God must be preached by all the prophets. There is no prophet of doom. Church’s continued mission on this earth is to be a prophet to call everyone to conversion to the values of the Kingly rule of God through service, witness, worship and commitment on the ethical issues of the contemporary world. What are the ethical issues of our society and the world? The Church continues to be on mission with the Father’s heart. Therefore, the Church does not have pleasure in the sinner’s death. We are the Church. We have the mission of a prophet—a calling that belongs to all the baptized by virtue of our Baptism. God appoints the prophets to a specific mission. This mission is to speak God’s word of truth. God’s word of truth is not a private or personal opinion, but the Word of God communicated through human words. The prophet speaks God’s word of truth to those within and those outside the Church. Prophets do not seek to proclaim a message that is easy to accept, but seek to speak God’s word of truth, no matter how hard it might be to hear and accept. Christ is the typical example of the identity and mission of the prophet.